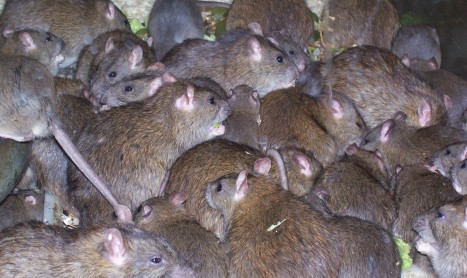 Tim from Pest Control Empire received a call to a Mitcham home, a suburb in Melbourne’s eastern suburbs, as the tenant was complaining of noises in the walls and ceiling. It didn’t take long for Tim to realise that the home was infested with rats. To be blunt, the home was in poor condition. Spare tyres, a vehicle body and other general rubbish was scattered throughout the front and backyard. The garden was overgrown, the bins were overfilled and the gutters were clogged with debris. To make matters worse, there were more entry points into the home than you could poke a stick at. It became obvious that the tenant was a hoarder. A build up of junk combined with an overgrown garden makes for perfect coverage for rats. As such, they had moved into this property where they were allowed to flourish. In ideal conditions, rats can breed in massive numbers in a very short time and this was exactly what was happening at this Mitcham residence.

A thorough inspection of the home revealed rotting weatherboards which allowed for entry into the wall cavities. This was just one of many entry points for rats. Once in the walls, these disease carrying vectors climb into the roof void, which is the ideal home for the common roof rat, also known as the ship, house or black rat.

The Norway rat, also known as the street, sewer or brown rat, prefers to live in burrows under the ground and under rubbish. This home in the east of Melbourne was host to both varieties due the presence of the three ingredients they require:

Food was being obtained from the rubbish bins that were overfilled. The lids could not close properly so entry was quite easy. Water could be obtained in numerous locations, including the insides of car tyres strewn around the backyard and in the gutters. The build up of debris did not allow for rain water to flow to the down pipes and into the storm water drains. It merely allowed the water to pool in the gutter, providing a constant source of water.

The roof void was easily accessible and provided perfect harbourage for roof rats to live and breed. The excessive debris and overgrown gardens allowed for perfect locations to burrow, aided by protection from predators by the rubbish that concealed their location.

Tim knew this job was going to be difficult. He contacted the landlord and he said the property was soon to be demolished and have 3 townhouses built in it’s place. He certainly had no interest in spending a quantity of money on rodent control.

The tenant clearly had a hoarding issue and broaching the topic of hygiene and cleanliness always requires courtesy and diplomacy. Tim discussed with the tenant the reasons why the home was attractive to rats with the utmost sensitivity. However, the tenant had been set in her ways for a very long time and the presence of these critters did not seem to worry her.

She explained that she just wanted some peace and quiet while she tried to sleep at night. She said that their were scratching, fighting and chewing noises all through the night. Tim explained that he could lay poison bait in the roof and that this would go some way toward removing the menace from her roof.

However, he said that without a major clean up and home renovation, the rats would continue to return. The client was happy for some short term relief so she approved the baiting of the roof void.

This is one of the extreme cases to confront Pest Control Empire. However, through careful explanation to the client we were able to meet her needs to some capacity. In an ideal world, the debris would have been cleared, the bins kept at manageable levels, and all entry points into the property should have been sealed wherever possible.

If you take one necessary ingredient away from pests, either food, water or shelter, you will usually remove the pest. In this instance this was not possible so an alternate management plan was devised.

If you hear noises in your roof you might be hosting rodents, or even possums. Either way, these animals do not belong in our homes. They defecate, urinate and chew wires. They have been known to cause fires so they need to be controlled at the earliest opportunity. Call 1300 665 573 or complete our Contact Us form to communicate with one of our fully qualified pest managers. We operate in all suburbs of Melbourne.