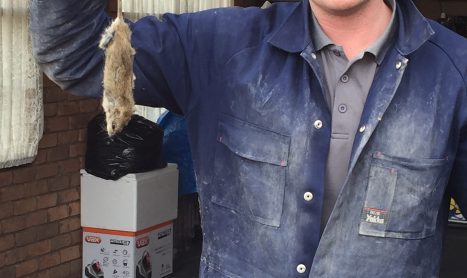 The removal of dead animals from homes throughout Melbourne has almost become a full time job for the team at Pest Control Empire. This is according to the owner of the company, Tim Clinnick, who says he’s receiving between 3 and 4 calls a day regarding dead animal odour. Tim says, “It’s been a prolific season for rodents and possums. It’s also been a prolific season for dead rodents and possums. The phone has been ringing off the hook with people desperate to have the foul stench of a dead animal removed from their houses”.

Tim and the team have been called out to suburbs throughout Melbourne to help poor residents. Tim continues, “I’ve been to Boronia to Warranwood to Keilor to Redesdale. Rats in particular have been the culprits, often dying in subfloors or walls”. Tim stresses that it is very important to remember where the smell first originated from as the carcass is most likely to be close by. A thorough search of the subfloor (if the home is on stumps) and the roof void is vital if the decaying body is to be found.

Tim notes, “I always ask where the smell was first detected as this provides the ideal starting point. If I’m lucky enough to find the carcass I then thoroughly inspect the roof void and subfloor area in a methodical manner so as not to miss another possible body. I certainly don’t want to receive a call in a few days time from an unhappy customer telling me that the smell is still around!”

Tim says that a foul smell, coupled with the presence of blow flies is a common sign of a dead animal on your property. Blow flies will lay eggs in the body. The eggs develop into maggots and the dead body becomes a food source for the maggots. The maggots will then soon develop into flies. Tim continues, “If you can’t find the body you basically become reliant on maggots to eat the carcass as quickly as possible. The sooner the flesh is consumed the sooner the smell will dissipate”.

This is certainly an unpleasant topic to read about but it is certainly not as unpleasant as having to put up with the smell of rotting flesh. Tim and the team at Pest Control Empire have a terrific strike rate at locating and removing decaying animals from subfloors, roof voids and wall cavities. Tim says, “In a perfect world the deceased will be lying in plain sight in the subfloor or roof void but this is virtually never the case. It always seems to be the way that rats and possums will curl up and die in the most secluded and secure part of the property. This is often a wall cavity and this in itself is problematic. These locations are hard to reach and often require cutting sections of plaster but the customer is always happy to have this done if it means removing the source of the smell!”

For all dead animal removal needs in Melbourne be sure to contact us either on 1300 665 573 or via the Contact Us page of this website. We certainly will give it our best effort to remove the source of the odour and if this is not possible, we also stock several odour removal products that produce fantastic results.