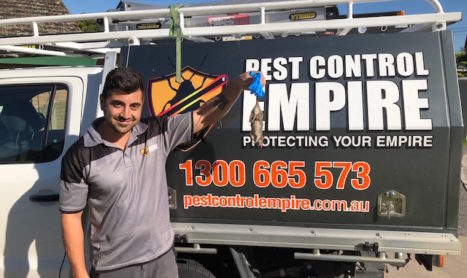 Melbourne is home to more than 5 million people. That’s a lot of people for a relatively small area. As in most heavily populated parts of the world, where there are people, there are also pests. Rats, mice, cockroaches, ants, and spiders are usually found living side by side with people.

“Mice are commonly referred to as field mice as they are associated with living in open fields and feeding off the land. However, as our population increases, we’ve had to build more Melbourne suburbs. As such, we’re removing the natural habitat of mice by building houses where open fields previously were”.

Tim continues, “Mice also prefer a warm climate and as any Melbourne resident knows, it can get quite cold in autumn and winter. Now put yourself into the ‘shoes’ of a mouse, would you rather live in a cold and wet field or in a dry Melbourne home with heating and quite possibly a regular source of food?”

If you hear noises in your roof or walls, mainly at night, then the likely culprit is rats or mice. Rats will more than likely avoid human interaction at all costs. For some reason, they think we’ll try and kill them! They’ll use the roof, walls, or subfloor of our Melbourne homes as someone to live and breed. They’ll then come outside at night in search of food.

Mice are more brazen and prefer to find a way into your home. They’ll scavenge through your pantry or fruit bowl and eat anything that isn’t in a sealed container.

Mice are commonly found in Melbourne homes with young children. As a parent we know that kids are messy and keeping on top of the cleaning can be difficult. Mice love to pick off the crumbs our kids drop on the floor. If evidence of mice is found in kids’ bedrooms, it’s likely because the kids have been eating or sneaking food into their rooms.

Common sources of food for rodents in Melbourne include:

A major attractant for rodents is also chickens. As many residents of Melbourne try to be as self-sufficient as possible, we’ve seen a dramatic increase in chicken ownership. Tim continues:

“Most Melbourne chicken owners prefer them to be free-range rather than confined to a locked coup. When owners feed the chooks they don’t stick around to ensure it’s all consumed. Any leftovers become easy pickings for rats and mice. A Melbourne chicken owner will usually be the cause of increased rodent activity in the near vicinity. This doesn’t usually make them popular with the neighbours!”

When the usual sources of food are scarce a rat or mouse will adapt and eat garden pests including slugs and snails.

Rodents are a major disease carrier and contaminate many Melbourne homes and businesses. Melbourne pest control is essential to manage rodents and other pests so contact us now for a quote.

Spiders are also very common in Melbourne homes. Web spinning spiders feed on insects and their webs are usually found near exterior light fittings. Flying insects are attracted to these lights and become tangled in the spider’s web. They then become a tasty meal!

Whilst we are most familiar with web-spinning spiders like the redback and black house spiders, there are also spiders known as ground-dwelling spiders. Many of these live in a burrow in the ground and wait to pounce on any unsuspecting prey. These types of spiders include the funnel-web and trap door.

There are also ground-dwelling spiders that are nomadic and keep on the move in search of prey. These spiders include the much-maligned white tail and the huntsman. Huntsman prey on insects and the whitetail is a cannibal and prefers a diet consisting of black house, redback, and daddy longlegs spiders!

We offer Melbourne’s best pest control that will manage the spider population in and around your home so contact us for a quote.

German cockroaches are considered a hygiene pest. This means that if you keep your home or workplace clean, then an outbreak is highly unlikely. Once they find a food source they breed and their numbers explode. By this stage, you will not be able to resolve the issue without a Melbourne pest control service.

When they are out of control German cockroaches will be found within your home in the following areas:

We find that people with German cockroach issues may be doing the following:

• Dirty dishes left out overnight;
• Internal bins not cleaned and garbage is not put outside often enough;
• Food spills not cleaned; &
• Kitchen splashback not cleaned after cooking.

Pest control Melbourne is what we love. For all your pest management needs be sure to call us on
1300 665 573 or lodge an enquiring via our Contact Us page. We look forward to hearing from you and assisting with your needs.