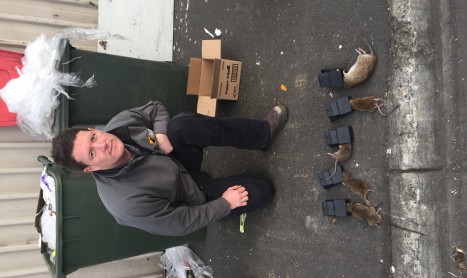 Rodent control in Footscray is the specialty of Pest Control Empire. The suburb is situated on the fringe of Melbourne CBD and is also home to the Footscray Market in Hopkins Street and the Melbourne Market in Footscray Road. Having so many food service and production businesses in such close proximity can only mean one thing: a large population of rats and mice. A comprehensive pest management strategy is vital for any food business operating in this area (and all other areas). The Department of Health is stringent in their enforcement of food safety standards and a current pest management plan is non-negotiable.

Tim is the owner of Pest Control Empire and he is very familiar with the western suburbs. He has many food business clients in the area. He says, “My clients and I work together to circumvent pests before they become a problem. An integrated pest management plan involving the elimination of conditions conducive to pests is our priority. High standards of cleanliness and hygiene must be adhered to. If we eliminate food, water and suitable harbourage locations then we generally eliminate the problem”.

Tim says that the problem exists where other businesses in close proximity do not have a plan in place. He continues, “In these situations, it makes no difference if you have the cleanest cafe or restaurant in the street. If your next door neighbour neglects his business to the point that cockroaches and rodents are present then it’s only a matter of time before they spread to your place of business”. Therefore you need to consult your local business colleagues to ensure they meet the required standards and do not impact on those businesses around them in a negative way. A rat control strategy devised by Pest Control Empire is a must.

Tim was recently called in to assist a wholesale fruit and vegetable supplier in the Melbourne Market. The owner, who we will only name as Rino for privacy purposes, advised that he had experienced a surge in rats since the wholesaler located in the site adjacent to him had moved to the new facility in Epping. Rino and the other business owner had failed to employ a pest manager to oversee the plan at their sites and as a result the rodent population was not controlled.

Rino was initially happy to lose the odd banana or stick of celery to the rodents but once he became the only resident of his site he found that all the local rats now called his facility home. He soon found that the rats had a particular taste for avocados and each evening they would feast on the trays containing this fruit. It got to the point where he was having to discard upwards of 4 trays a day, costing in excess of $200.

Rino soon realised that he needed to take action. Tim received the call and attended that morning. The rodent bait stations were inspected and upon opening they were found to be without bait. The dust build up indicated that it could have been years since they were last checked. The only threat to the local rats therefore appeared to be dying of old age rather than unnatural causes! Tim knew that there was very little point in restocking the bait stations at this time. The logic being was that why would a rat suddenly change his diet from avocados to a poisonous wax block? The answer is that they wouldn’t. But what to do?

The wholesale fruit and vegetable business is obviously a food business and strict guidelines apply with regard to the use of poisons. Tim decided to install 24 x snap traps strategically throughout the facility, but with a particular focus on the area surrounding the food of choice, the avocado. But what substance would Tim add to the snap trap to entice the curious rat? Avocado of course! Tim thought that this would be the perfect lure and as it turns out, it most certainly was.

On the first evening of setting the traps we had instant success. 5 rats were caught in the traps and disposed of the next morning. The further good news was that only 2 individual avocados were contaminated. The strategy worked for the next several nights until the point where no further rats were caught and no stock was lost. The lockable bait stations were then restocked and secured around the perimeter of the facility to attract any new rodent arrivals.

Tim and Rino then structured an ongoing management plan to make sure this type of situation never arises again. If you operate a food business and require a pest management plan simply contact the team at Pest Control Empire on 1300 665 573 or complete the Contact Us form and we’ll make contact with you as soon as possible. Save the reputation of your business and protect your bottom line with the help of Pest Control Empire.