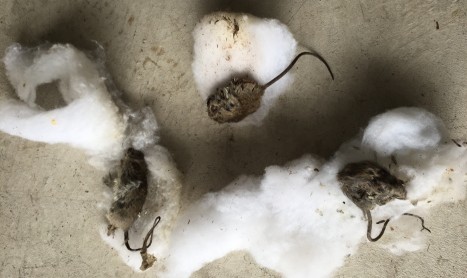 I Need a Dead Animal Removed

“Help Me! There’s a foul smell and it’s stinking out the entire house. Please get rid of it!” Tim Clinnick from Pest Control Empire receives as many as five calls a day about foul-smelling homes. The stench of death is quite overpowering and has made many a resident vacate the home. Tim says the culprit is usually one of the following decaying animals:

Tim says that homeowners often hear noises in the roof and they assume that rats or mice are up there. They may decide to put bait in the ceiling and see if things settle down. Usually, two to three weeks later a foul smell may appear. Gradually it will spread throughout the majority of the house. However, it can quite often be a decaying possum and the homeowner may have inadvertently broken the law. You see, possums are native to Australia and are not allowed to be killed.

That’s why Tim says it’s always important to call in a professional if noises are heard in walls or the ceiling. He adds, “A thorough inspection of the subfloor (if present) and the roof cavity will soon determine what pest is living in the home with you. The nesting materials and droppings will provide ample evidence as to what unwanted guest is gatecrashing”.

Once identification is made a strategy to remove the problem can be implemented. If it’s a possum the entry point needs to be identified and closed off. A one-way exit door must then be installed so that the possum can still exit but not re-enter. Tim says that often rodents and possums share the same roof space. In circumstances like this, it’s the possum that needs to be removed before any baiting plan can commence controlling the rats or mice.

Baiting for rodents is usually the best method of eradication although there is the real possibility that the animal will die either in the subfloor, in a wall, or in the roof. He continues, “I often hear from my clients that prior to baiting, the pest controller (not us) advised them that the bait ‘dries out the rodent and they go searching for water’.” Tim disputes this oft-quoted belief as the numbers just don’t correlate.

He says, “I attend several jobs a day in regard to dead animal removal in Melbourne. It is usually after a baiting program had been initiated. The smelling animal is usually found curled up in its nest so it’s not factually accurate that the bait ‘dries them out’. In fact, most baits prevent the rodent from being able to clot their blood after an injury.

So for example, if a rat jumps a distance from a tree branch onto a rooftop, he may cause him or herself internal bleeding. Usually, the body is able to clot the blood so that the bleeding stops. However, if the rodent had consumed these particular types of baits, clotting is not possible and the animal will bleed out internally and eventually die”.

So the moral of the story is, don’t believe the old wive’s tale about the bait causing the rodent to become thirsty and seek water. Tim concludes, “There is always the risk that the animal will die on the property. However, I’d rather put up with a foul smell than know that rodents are running amok in my roof. They spread disease, damage property, make annoying noises that keep us awake, and generally just freak people out! Anyway, if the smell becomes too overbearing, just give us a call and we’ll attend to remove the dead animal for you”.

For any pest issue you may have be sure to call us on 1300 665 573 or fill in the Contact Us form and we will call you back at an appropriate time.