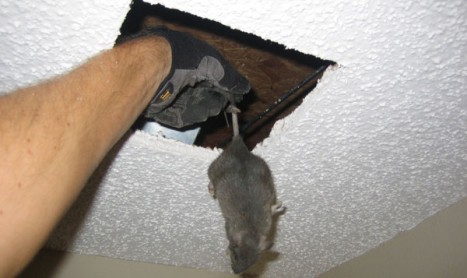 A common occurrence in the colder months is for animals such as possums, rats and mice to venture into our homes in search of a suitable location to live. Our subfloors, walls and roof voids provide perfect harbourage for these pests. Tim Clinnick of Pest Control Empire specialises in residential pest control and has reported a major increase in animal pest activity in and around Melbourne this year. He says, “The summer saw a dramatic increase in wasps. This winter the possum and rodent population also seems to have exploded”. A serious problem with animals coming into our homes is that they will often die indoors.  A rotting animal carcass is a serious health risk and the resultant smell is unbearable.

Rodents and possums will often chose a quiet, dark and confined space in which to die. That’s why carcasses are often found in wall cavities during renovations. Tim continues, “I’ve had numerous calls this winter from customers complaining of a putrid smell, usually coming from inside a wall or in the roof cavity. Naturally they want the source of the smell removed as well as the actual odour. I’ve had great success in locating the carcass but removal at times has been very hard!”

Tim was recently called to a home in Boronia, a leafy outer-eastern suburb of Melbourne that is particularly popular with possums. Tim states, “I got a call one Friday evening from the home owner who said she heard scratching in her linen cupboard two weeks prior and thought an animal was possibly living in the walls. She said two weeks had passed before an awful stench had developed in the cupboard. The poor lady had to wash all her linen and towels to try to remove the smell”.

Tim attended that same Friday night as he was not going to make the lady and her family tolerate that smell the entire weekend. Tim followed the smell to it’s strongest point, which just happened to be directly above the linen cupboard. The presence of blow flies is also a strong indication of a dead animal. A small crawl space above this cupboard allowed for Tim to enter and search down a wall cavity. Low and behold, the possum decided to enter this cavity and must have become stuck. It would have died of starvation or stress not long after.

Tim adds, “I’ve got long arms but even I couldn’t reach down. I had to cut the handle of a children’s rake, strategically position it into the cavity and hope that I was able to lift the possum. After about 45 minutes I managed to extract the possum. I won’t go into the gory details but let’s just say, it was the longest 45 minutes of my life”. The possum was placed into a bag and Tim placed an odour removal gel into the cavity and into the cupboard to remove the smell. Tim adds, “I stock quality odour removal products that take effect almost instantly. The products are completely non-toxic and they work around the clock to remove the odour”.

While on this occasion Tim was able to extract the carcass without causing any damage, there has been other times where there is no other option than to cut through plaster. There may even be the occasion where the carcass cannot be located. For times like this Tim also stocks odour eliminators that work even without the need to remove the dead animal. Tim concludes, “It is always best to remove the source of the smell whenever possible. However, this may not always be possible. Never fear though as we stock quality products that take away the smell of dead animals as well as the odour of any droppings and urine. I’ve built up a strong tolerance to bad smells after working this job so feel free to call me anytime you need a bad smell removed!”

Pest Control Empire operates in Melbourne and surrounding suburbs for all pest control, pest inspections and odour removal needs. Simply contact us on 1300 665 573 or complete the short Contact Us form and we will soon be in touch.