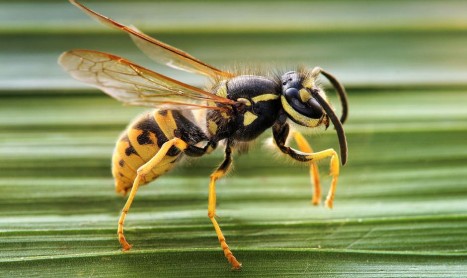 Tim Clinnick of Pest Control Empire reports that his company is still receiving consistent calls out for European wasps, despite the onset of winter. Pest Control Empire specialise is wasp eradication in Melbourne and surrounding suburbs. As reported in the media, European wasps are in plague proportions. Tim states that the majority of nests he has found are inside wall cavities of homes and are very rarely able to be removed. This however, does not mean that the problem cannot be resolved.

Tim adds, “In circumstances where the wasp nest cannot be accessed, it is very important to find all access points. We’ve found that many nests are in wall cavities, with wasps gaining access through brick work, particularly around door frames. Whether it be a slight building fault or broken mortar, wasps will find an opening and build a nest. The queen will immediately commence reproduction and numbers will quickly swell”.

Tim continues, “If you suspect a wasp nest is on your property, take some time to watch the foraging wasps. Soon enough they will return to the nest. They usually enter and exit through a common point. Sometimes there will be multiple entry and exit points but they will be close by and easily identifiable”.

If you cannot find a nest it may be that one is not necessarily on your property, with wasps believed to travel anywhere up to 200 metres from their nest in search of food. In instances like this Tim still believes it is best to contact a pest control professional to conduct a thorough inspection. He continues, “Nests can be anywhere. If you have extensive gardens and thick shrubs the nest could be concealed underground near these areas. You might not be able to find it but an experienced pest manager usually will”.

If you have a wasp problem it is imperative that it is inspected and treated as soon as possible. Wasps, unlike bees, have the ability to repeatedly sting. Furthermore, once they are disturbed or consider themselves under threat, they release an alarm pheromone that alerts other wasps about the impending danger. These social insects respond by swarming. A moving object, such as a person or pet, then becomes the target of attack.

Tim does not encourage anyone to Do It Yourself when it comes to wasp control. He notes, “I’ve seen people seal up entry points with silicon or expanding foam. The wasps laugh at this and will soon eat their way through. The odds of getting stung while doing this is also quite high. While stings usually just cause pain and swelling, some people can suffer an allergic reaction. People have died from wasp stings so they certainly should not be approached or disturbed in any way”.

If a nest can be located and removed, this is the ideal result when it comes to wasp control. Tim has removed many nests. He says, “I always put on a protective suit and thick gloves when dealing with wasps. No skin at all should be exposed. I then treat the nest with an insecticidal dust using a hand held battery operated duster. A sufficient amount needs to be injected into the nest to ensure all the occupants are affected. Death is usually swift. Once activity is at a minimum then then should be removed and disposed of”.

However, as we explained earlier nests are not always accessible. In times like this Tim also has options. He adds, “When we do not have any access to the nest it is imperative that all entry and exit points are located. A sufficient quantity of insecticidal dust needs to be applied to these zones. In some instances an extension needs to be added to the duster to gain access to hard to reach places. Once a sufficient quantity of dust is injected the wasps within the nest will die. Those that are out foraging will soon return to the nest, collect dust on their bodies and also die. It is also very important to inspect inside the house to see where the dust and any wasps might go. lose off any obvious holes and advise the client to vacate the area during the treatment”.

Tim has some advice on how to make your property less attractive to wasps. He notes that you should:

Tim was recently called to an address in Hillside as the owner was reporting an high presence of wasps around her dog’s enclosure. Upon inspection Tim found a number of dog bones, some still containing meat, that was the main attraction. Another source of attraction was the dog food bowl which was left outdoors and was rarely cleaned. Tim adds, “I searched the property thoroughly and could not find a nest. I attended and immediately noticed things that made this particular area attractive to wasps. I instructed the owner to replace the bones with solid chew toys and to feed the dog indoors until the problem was in hand. The grass was also quite long so this needed to be mowed”.

Tim continues, “In this instance a chemical treatment would not serve a meaningful purpose as the nest could not be located. By manipulating the environment, known as integrated pest management, we were able to bring the problem under control. A home remedy we also adopted was to set up a water trap just outside the dog’s enclosure. Here we filled a small container with sugary water and a few drops of dishwashing detergent. This attracts wasps to the site. The detergent breaks the surface tension of the water, so when a wasp lands on the surface it will sink to the bottom and subsequently drown.”

The end result is a happy client and a dog that will not long be at risk of getting stung.

For all your pest control needs in and around Melbourne be sure to call1300 665 573 or book online via the Contact Us page.