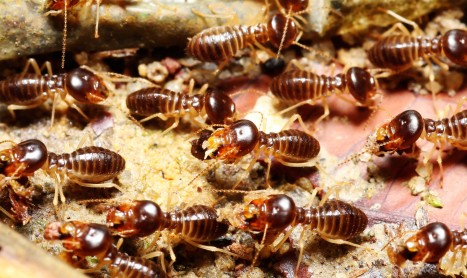 Tim from Pest Control Empire is reporting a surge in termite control Melton and Melton South. He notes, “I’ve been conducting termite inspections regularly in the Melton area and the majority of homes I have inspected have displayed evidence of termite activity. On average, it’s believed that one in every four homes will be impacted by termites in its lifetime. That is a scary statistic considering how much damage these wood-eating creatures can do”.

Just this week Tim was called to a home in Richard Road, Melton South. The owner was vacuuming and the head of the vacuum pushed through the skirting board. Termite damage was uncovered and a further inspection of the home revealed more damage. Tim attended an conducted a thorough timber pest inspection. The entire property including gardens, trees, and fences needs to be inspected. The exterior and interior of the home including any subfloor and roof void must also be inspected.

Tim adds, “I conducted an inspection of the Richard Road home and I’m satisfied that the damage is old and that no termites are currently in the home. The damage was confined to the rear section of the home. The skirting boards and door frames had been considerably damaged in this area. Termites had eaten through the wood and had just left the paint. There is usually a reason why termites target home and one of these reasons is excess moisture. I queried the owner whether there had been any water leaks and she confirmed that the shower had not been waterproofed and had been leaking for years”.

Tim also noted that termite damage was evident in piles of wood that had been placed in the garden beds and around the home. Two tree stumps also had evidence of termite damage and stumps are common homes to colonies.
Tim continues, “The tree stump at the entrance to the home seems likely to be the home base of the termite colony. The stump has been severely damaged by termites and all the traditional signs of their activity were detected. This includes mud packing that they build to travel through. I drilled around the stump but did not locate any activity so if the colony is here it is likely to be underground”.
The stump is going to be removed by a professional stump grinder in the coming days. The soil around this area will also need to be treated with a termiticide.

Tim is confident that there is no current activity inside the home. However, that’s not to say that these destructive insects won’t be back as temperatures rise and the need to feed more regularly also rises. This particular property is on a slab and the owner had put garden beds around the majority of the home. Soil levels had been built up and in some areas, the soil level was higher than the weep holes. This could provide concealed entry into a home for termites.

Tim has developed a plan to protect the home from a future attack that includes trenching around the perimeter of the home. The soil level will be brought down to below the slab edge. Ideally, there should be 75mm of slab exposure to allow for future inspection. The soil around the home is then to be treated with Altriset, a termiticide that has been very successful at protecting Melbourne homes.
There are also sections around that home that have been concreted. Holes are required to be drilled every 150mm and injected with Altriset to form a complete barrier around the home.

Tim concludes, “I love Altriset as it is a non-repellent. Termites cannot detect it’s the presence and so they travel through the poisoned soil without knowing it. It’s the perfect product to use when you cannot completely trench around the entire perimeter of a home. When you need to drill and inject through concrete you can never be certain that the injected chemical will form a complete barrier. If I used a repellent in these circumstances, the termites will detect its presence in the soil and they will search around it for a breach in the barrier. If there is a breach they will find it and eventually get into the home. I am less concerned when using non-repellents as these insects won’t even know that they are passing through it. The only downside with a non-repellent is the cost but when it comes to protecting your home there should be no compromising on price”.

Pest Control Empire specialises in termite control in the Shire of Melton. If you suspect the presence of termites and require a professional inspection simply contact us on 1300 665 573 or complete the Contact Us form and we will respond in quick time. Your home is your castle so make sure it’s protected from the ‘silent destroyer’.